Cyanobacteria or blue green algae are the most diverse group of oxygenic photosynthetic microorganisms. Unlike plants, they posses thylakoid instead of chloroplast and phycobilisomes located on thylakoid act as the major light harvesting pigments. Phycobilisomes are composed of three group of proteins which are differentiated on the basis of spectral properties and these proteins are phycoerythrin (PE absorption maximum~565 nm), phycocyanin (PC absorption maximum ~ 620 nm) and allophycocyanin (APC absorption maximum ~650 nm). These pigment proteins are of immense industrial importance due to their wide ranging application in biotechnological and pharmaceutical sectors (Eriksen, 2008; Chakdar et al., 2012). However, their application and price depends on the purity of the protein. Price of phycocyanin of pharmaceutical grade may go up to 150 USD per milligram. A number of methods do exist for extraction and purification of these proteins which are mainly based on chromatography. Gel permeation chromatography, anion exchange chromatography, hydrophobic interaction chromatography are the major chromatographic techniques but most of these techniques involve more than one chromatographic steps for the purification. Some other techniques involve steps like membrane filtration, use of organic solvents etc. Which may some time be unsuitable for used in foods and pharmacuticals. It is therefore very important to have simple and economical techniques to purify pigments with substantial recovery. Here , we present a comparative study of widely used anion exchange chromatographic method involving phosphate buffer with a newly developed method in our laboratory for purification of phycocyanin from both heterocystous and non heterocystous cyanobacteria.

Axenic cultures of the above mentioned cyanobacteria were procured and maintained in chemically defined nitrogen free BG-11 media (Stanier et al., 1971) at 28 ± 2oC under a light intensity of 52-55 μmol photon m-2 s -1 and L: D cycles of 16:8 hours. Extraction and purification of phycocyanin: Phycobilproteins (PBP) were extracted from log phase culture by freezing and thawing (using 20 mM acetate buffer / 50 mM phosphate buffer)Precipitation of crude extract using ammonium sulfate Dialysis against appropriate buffer and Anion exchange chromatography using DEAE-Cellulose column where the column was developed by acetate buffer ( with linear gradient of pH from 3.76 to 5.1) or phosphate buffer independentlySpectrophotometric determination of quantity (Bennett & Bogorad, 1973) and purity of the eluates.

Phycocyanin is a blue natural food colorant that can be used as a functional food ingredient for several health benefits and as a natural colorant. For dairy products, it can be used in additives such as dyes with stabilizers and emulsifiers during the manufacturing process. The biosecurity of food is threatened due to the addition of synthetic additives and artificial colors in food, as they sometimes inhibit the absorption of some nutrients and may cause allergic reactions. It is evident from the study that acetate buffer is comparatively better than phosphate buffer for extraction and purification of phycocyanin from both heterocystous and non-heterocystous cyanobacteria. It holds a good potential to be explored for commercial purposes , however, scaling up the process for large scale purification needs to be explored. 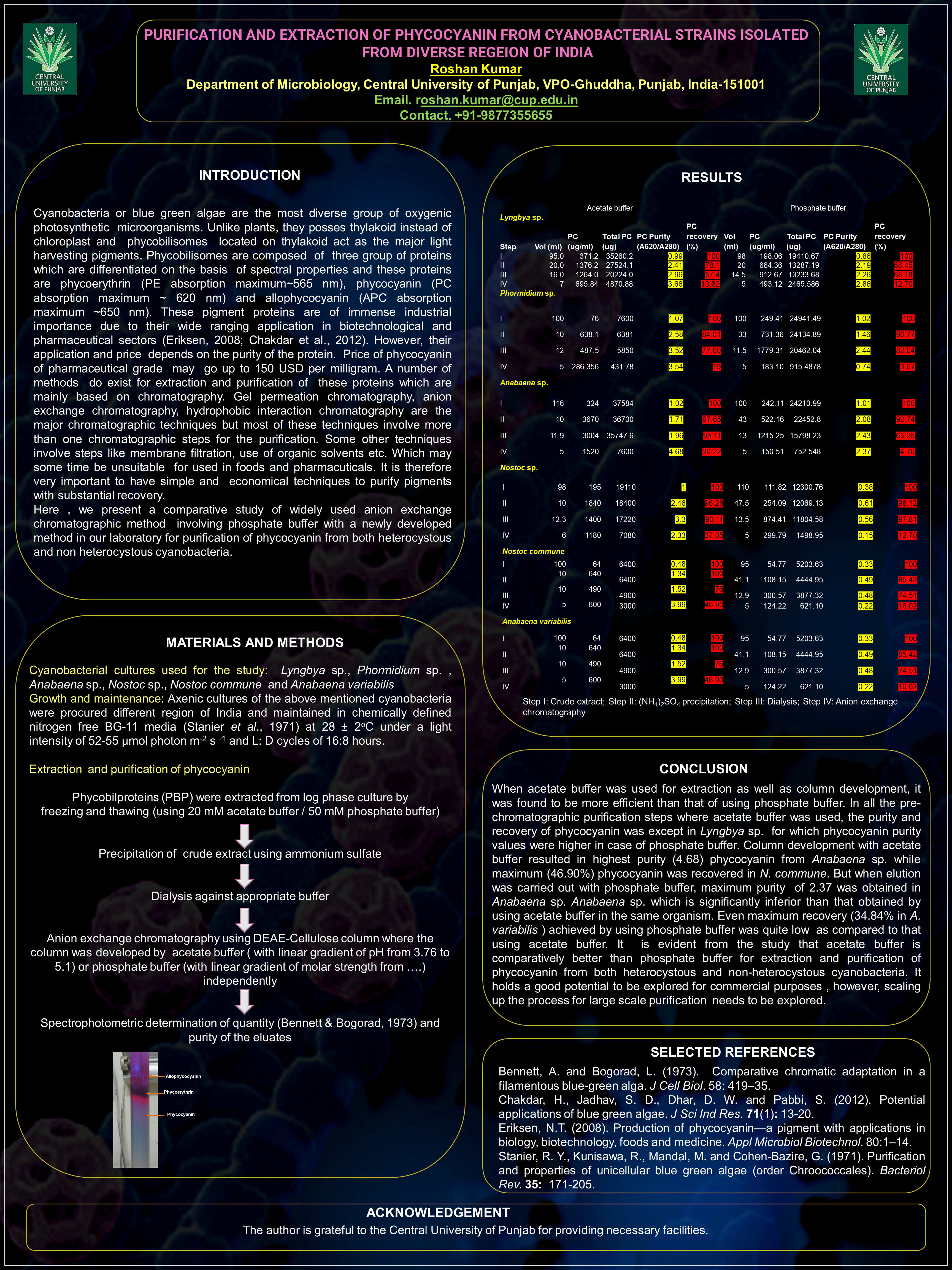