The Role of TNF in Age-Related Changes in Macrophage Function

Many older individuals have impaired lung immunity, recently highlighted in the ongoing COVID-19 pandemic. However, even prior to the pandemic, older adults were disproportionately likely to contract and die from respiratory infections such as bacterial pneumonia. Macrophages, the sentinel immune cell in the lungs, are known to exhibit impaired killing of Streptococcus pneumoniae with age-related increases in TNF-α, however the mechanism underlying this relationship has yet to be fully elucidated. A better understanding of the mechanism underlying age-related macrophage dysfunction is necessary for the development of novel therapeutics for the treatment of bacterial pneumonia in older adults.

TNF-α knockout mice were aged alongside wild type C57BL/6 mice until they were >18 months in age and compared to their younger, <16 months, counterparts. Bone marrow-derived macrophages were isolated from these mice and were analysed using a number of molecular biological techniques, such as RNAseq, qPCR, and Western blot. The function of isolated macrophages was also studied in vitro by co-incubating macrophages with S. pneumoniae to measure rate of bacterial killing.

Our preliminary data shows that old WT murine macrophages exhibit impaired bacterial killing, while old TNF-α knockout macrophages do not. Old WT murine macrophage function also improved after TNF-α blockade, suggesting that age-related increases in TNF-α impair macrophage function reversibly. Knowing this, we conducted a pilot RNAseq analysis between old WT and TNF-α knockout mice. We found negative regulators of MAPK and PI3K signalling (A20, DUSP1, PTPRS1) to be elevated in old WT but not TNF KO mice. To further clarify the relationship between TNF-α and negative regulator expression, we found that old WT macrophages stimulated with TNF-α had greater induction of A20 expression than young WT macrophages. We have also preliminarily found MAPK signalling pathway activity to be reduced in old WT but not TNF-α knockout murine macrophages. 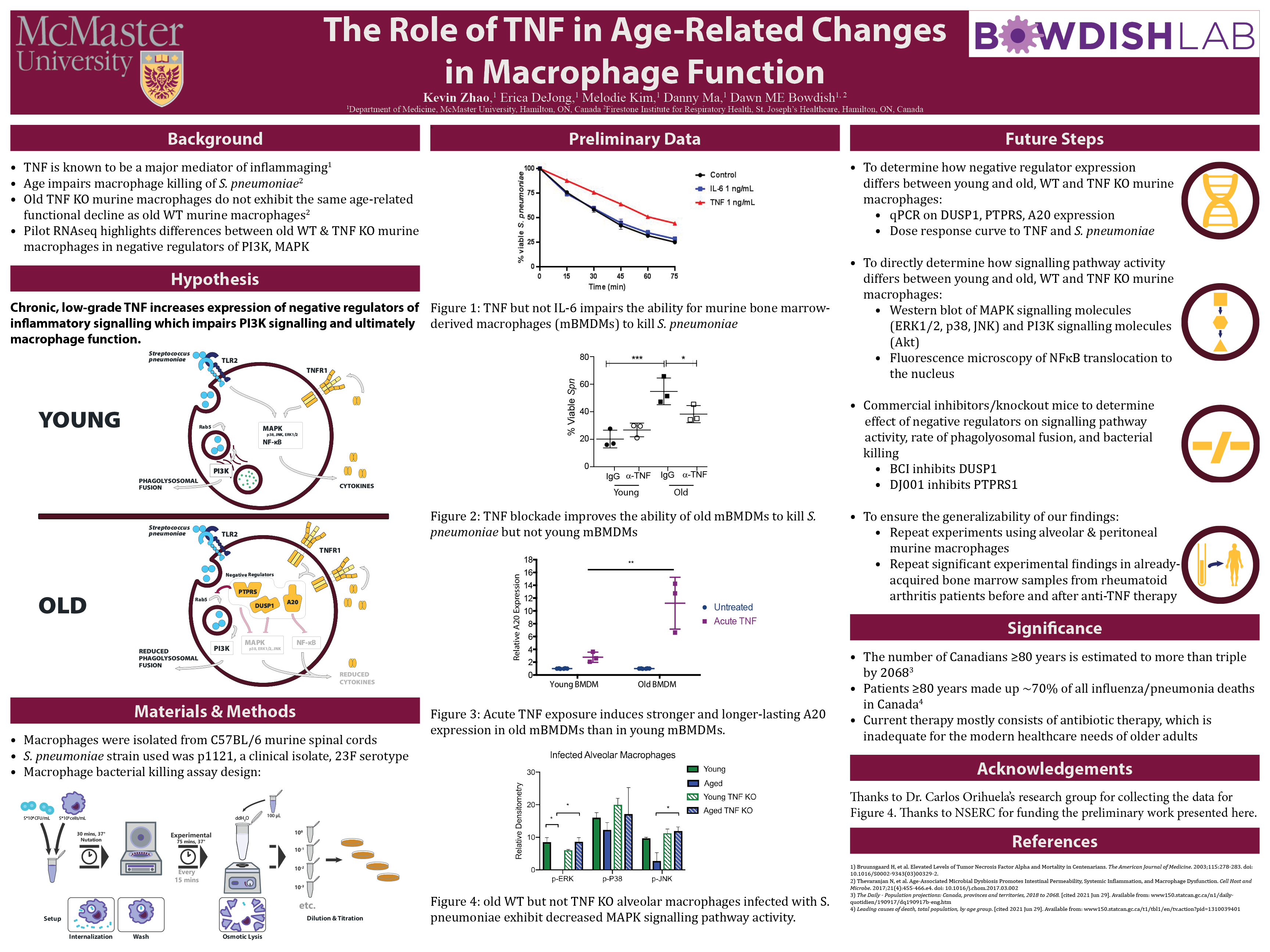