Coronavirus disease (COVID-19) is the clinical syndrome associated with SARS-CoV-2 infection characterized by a respiratory syndrome with a variable degree of severity. Cytokines such as Interferon (IFN)-γ are important in the antiviral response. It has been reported that in SARS-CoV infections, the type I interferon (IFN) system induces the expression of IFN-stimulated genes (ISGs) to inhibit viral replication. In this regard, polymorphisms in IFNs become relevant in the context of the infection of SARC-CoV-2. The aim of our study was to investigate the role of the interferon gamma (IFN-γ) gene at (+874 T/A) single-nucleotide polymorphisms (SNPs) in the context of the susceptibility of Mexican individuals with SARS-CoV-2 infection.

Genotyping of the interferon gamma (IFN-γ) (+874 T/A) single-nucleotide polymorphism will be carried out using T-ARMS-PCR technique in which the T and A polymorphism sequences will be identified using a specific primer synthesized to cover a 24-bp region for each allele.

So far we have analyzed 14 healthy individuals without SARS-CoV-2 like symptoms as a control group (CG) and 17 SARS-CoV-2 positive individuals (SCP) with a Ct between 16 and 30. All subjects were genotyped for +874 T/A, rs243056 SNP of the IFN-γ gene using T-ARMS PCR technique. We identified that the genotypes for the IFN-γ gene at (+874) AT, A homozygous and T homozygous was in the 57, 35 and 7% of the CG group and in 47, 47 and 6% of the SCP group, respectively. No statistical difference was found between the groups. We also analyzed clinical data for the SCP group regarding symptomatology finding that the AT genotype showed more symptoms like fever, headache and dry cough when compared with the A and T homozygous genotypes.

In the context of other infections like HCV, the carriage of T allele of (+874) IFN-γ is a risky allele, however, in our study we did not found any correlation maybe due to the small number of individuals in each group. A larger number of individuals must be included for both groups to assess the potential role of the IFN-γ gene (+874) polymorphisms in the context of the infection by SARS-CoV-2. 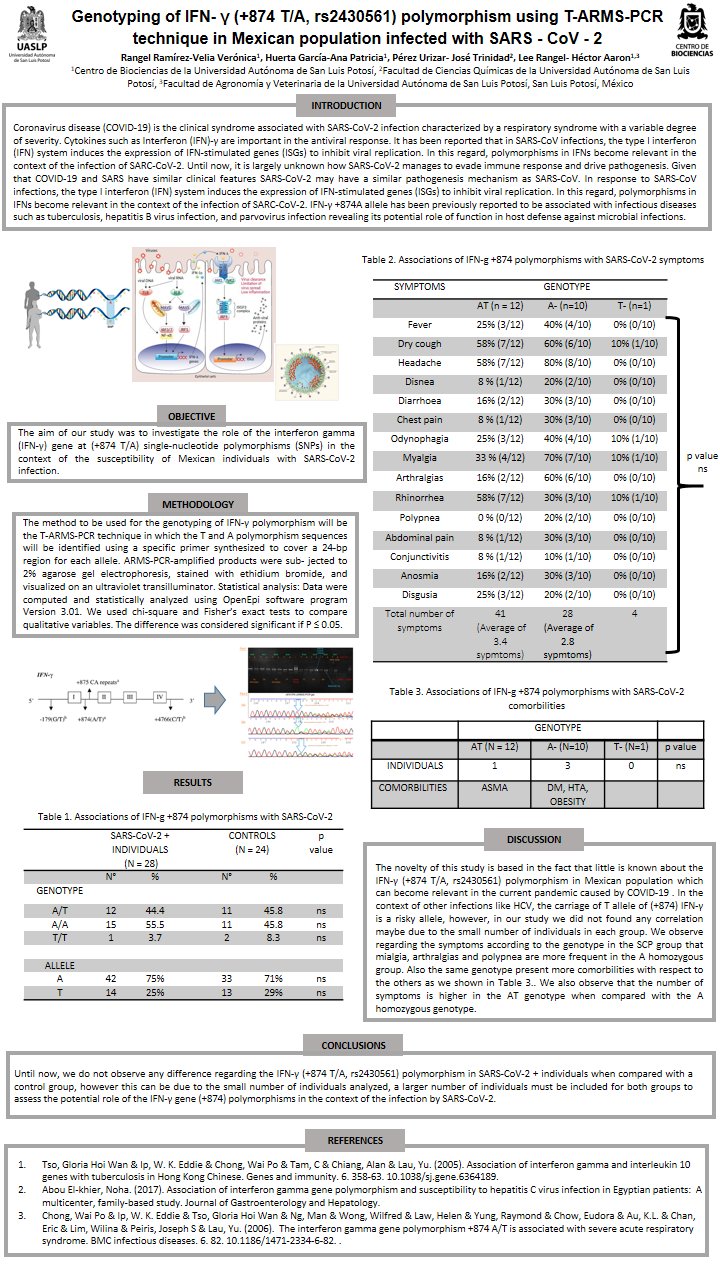