Tobacco contains more than 60 carcinogens which is the principal risk factor in oral squamous cell carcinoma. Tobacco-associated oral carcinoma morbidity and mortality rates are continuously increasing globally despite of advanced treatment modalities. The poor survival rate in oral cancer patients is attributed to the genetic and epigenetic alterations which are unresponsive to conventional chemotherapeutic and radiation therapy, particularly in advanced and recurrent cases. P53 tumour suppressor is the principal mutated gene in half of the cancers which is the central regulator of 3 billion base pairs human genome playing a significant role in DNA repair and apoptosis of the damaged cells. The molecular basis of p53 mutational patterns in smoking induced oral carcinoma is poorly understood. This study attempts to screen the existing research evidence base to understand the carcinogenic pathways involved in the interaction of different tobacco carcinogens causing acquired mutation in wild type P53 gene in oral epithelial cells developing oral squamous cell carcinoma. TP53 mutations are detected in all stages of oral carcinoma and it is associated with poor prognosis and reduced survival rate. Due to the mutation in the P53 sequence, it is inactivated and unable to bind with the DNA to inhibit abnormal cell differentiation giving rise to tumorigenesis. A missense mutation in the DNA
binding domain of P53 is the most prevalent type of mutation in oral carcinoma.

To analyze the existing literature to understand the molecular pathways triggered by the
carcinogens from tobacco which mutate tumour suppressor gene P53 and its role in
transforming a normal epithelial cell into a cancer cell this study reviewed the PubMed and EMBASE databases using search terms ‘oral cancer’, ‘P53’, ‘carcinoma’ , ‘mutation’ combined with ‘tobacco’ ‘cigerrete’, ‘smoking’.

This study highlighted the key role of the P53 DNA binding domain in oral carcinoma. Tobacco carcinogens when chronically exposed to the epithelial cells bind with the segment of DNA forming DNA adducts which triggers P53 mutation in oral mucosa but the molecular mechanism needs further exploration. It was revealed that carcinogens, particularly PAH-induced Guanine to thymine transversions are attributable to P53 mutations in smoking-associated carcinomas. The TP53 mutational patterns in smoke-associated carcinoma are different in comparison to nonsmoking carcinoma suggesting the crucial role of carcinogens in pathways involved in TP53 mutation in tobacco-induced oral carcinoma. In recent years P53 has been genetically engineered to be used as gene therapy in recurrent oral cancer patients as an adjunct to conventional treatments because of its tumour suppression mechanism.

This study revealed the significant role of amino acid arginine which is the most commonly mutated residue at DNA binding domain in cancers. Most studies have emphasized the impact of P53 mutation on the clinical outcomes of oral cancer patients in comparison to the molecular mechanisms of P53 mutations and their potential as a therapeutic agent in oral cancer treatment. Hence, further research is required to understand the molecular basis of tobacco carcinogen-induced oral carcinoma to identify unknown key biomarkers and genes which could be used as therapeutic targets for improved management of oral cancer.
Every component in tobacco (smoke and smokeless) is a risk factor giving
rise to numerous cancers. It has the potential to change the genotype of a cell completely inactivating physiological functions. 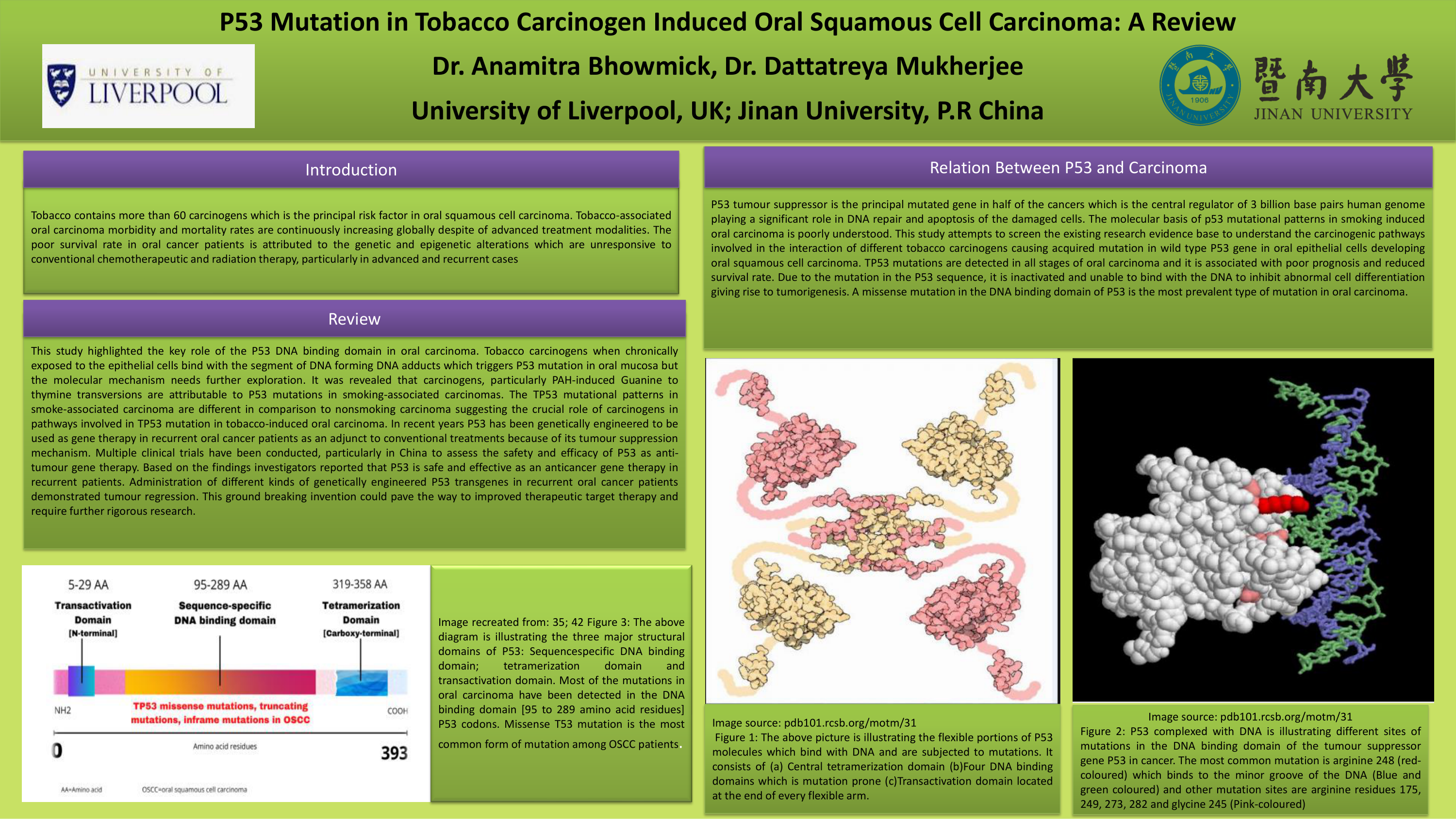