Diabetic foot syndrome is a serious chronic complication of diabetes. This condition is associated, according to the WHO (World Health Organization) definition, with the presence of infections, ulcerations and deep tissue destruction. Currently, a lot of research is being conducted in the field of developing therapies supporting the treatment of foot ulcers in diabetes. The most promising seems to be the development of human skin substitutes and hydrogel preparations containing platelet-derived growth factor or insulin.
Insulin affects the regeneration and reconstruction of damaged skin. Incorporation of the hormone into the polymeric network of the hydrogel may affect the quality of the wound healing process in diabetic patients. The aim of our study was to develop a gel formulation of insulin for topical application. Dermatological hydrogels were chosen, which are characterised by simple and low-cost manufacturing technology.

Hydrogels were prepared based on Carbopols (UltrezTM10, UltrezTM30), methylcellulose and glycerol ointment. The insulin concentration was 1 mg/g hydrogel. The effect of model hydrogels on insulin pharmaceutical availability was evaluated in vitro. The texture parameters and rheological properties of the formulations were examined.

From the hydrogel based on Carbopol® UltrezTM10 (H1-INS) and the hydrogel based on Carbopol® UltrezTM30 (H2-INS), 70% and 65% of insulin was released after 3 h. From the methylcellulose-based hydrogel (H3-INS), 75% of the hormone was released after 9 h. From the glycerol ointment-based hydrogel (H4-INS), 60% of the API was released after 6 h. The longest insulin release occurred from the H3-INS formulation, which provided a longer duration of action of the hormone. Rheological analysis of the tested formulations indicates that they belong to non-Newtonian fluids, diluted with shear. They are characterised by a low degree of thixotropy and the presence of yield stress. Formulation H3-INS was distinguished by the lowest stiffness (%R: 74.9%), easier application on the skin (hardness: 0.040 N/m2/32°C) and high cohesion.

The results obtained from the preformulation studies indicate that methylcellulose is an optimal carrier for insulin, with prolonged release.

The research project was financed by the Medical University of Silesia in Katowice No. PCN-1-191/K/0/F. 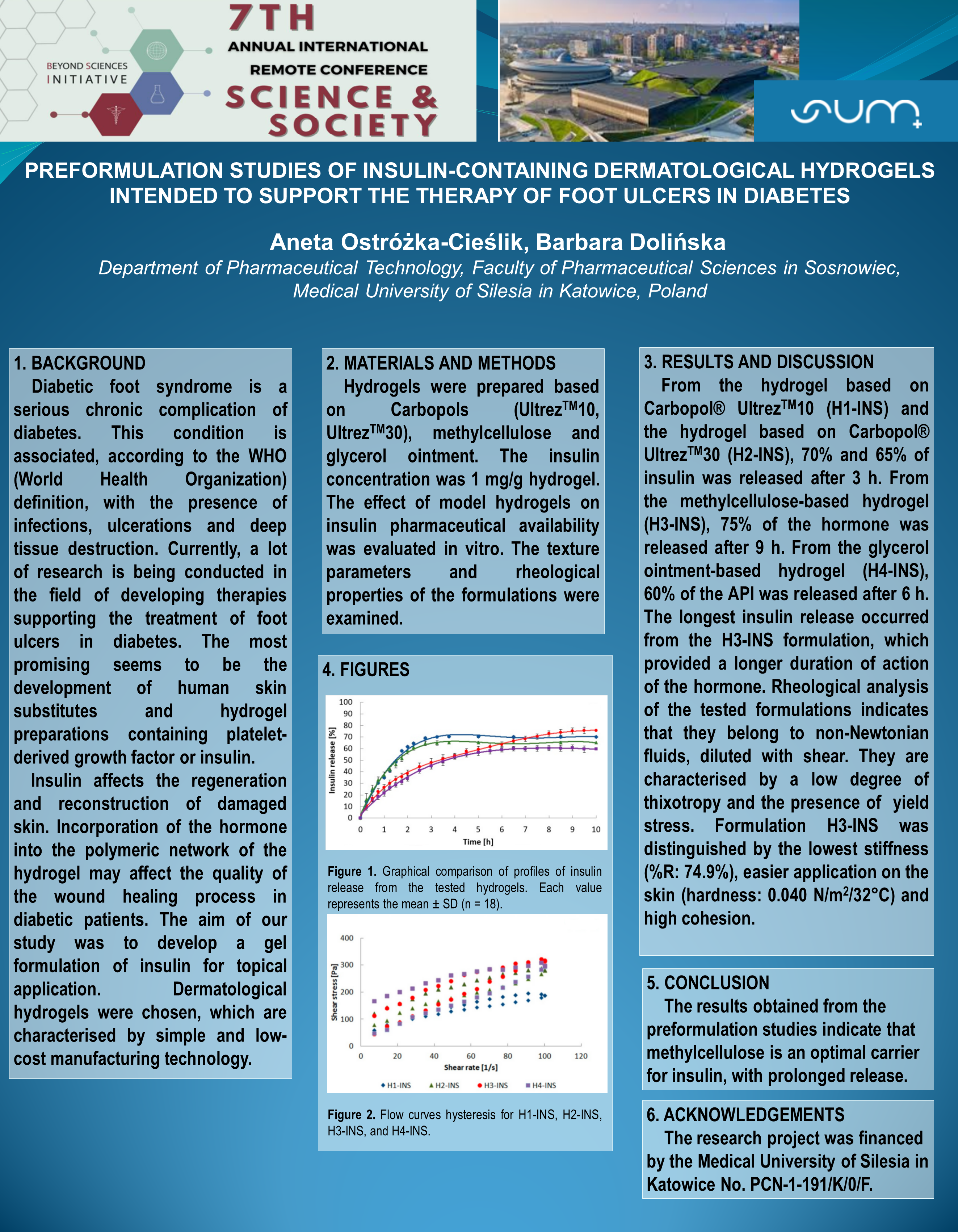